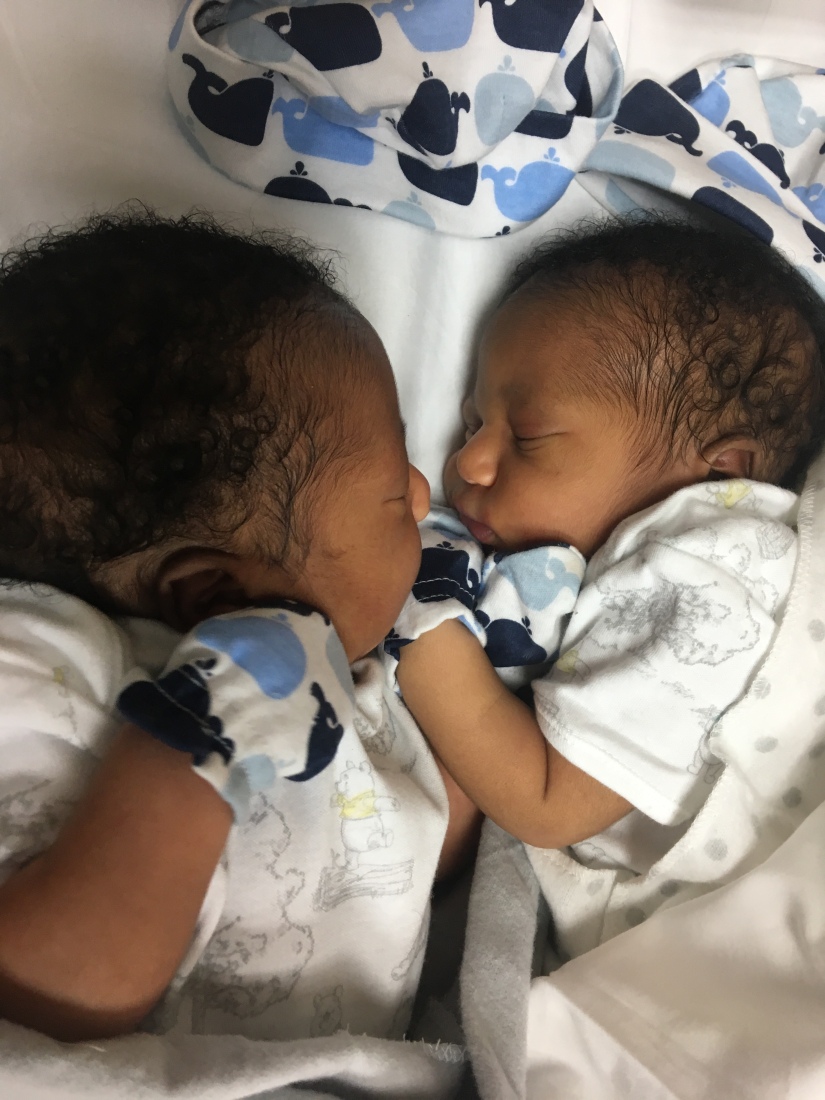 17th December 2018 couldn’t come soon enough. This date was registered in my brain like a meter! As per the doctor’s advice, 37 weeks was the best time to bring the twins out. A caesarean section was the best option because they were sharing a placenta and the risk would have been too high if we opted for a vaginal delivery. So the countdown began!

I checked in to the hospital the day before in the morning since it was a planned CS. I was so calm and at peace because I was so grateful I had made it this far and also that I was going to meet these boys who wouldn’t keep still in me! I wasn’t scared because this wasn’t my first CS. Although it was an emergency with my daughter, I knew what to expect. The next day, I was prepped and ready for surgery by 8am. Please I have a question 🙋🏽‍♀️… Why are these nurses not gentle with shaving your lady parts? Like why are we fighting? And having to insert the catheter.. hmmm. Anyways TMI. Moving on. I hadn’t eaten anything since the night before at about 7pm because you’re not supposed to.

I was wheeled in to the theatre and to my surprise there were so many people there. The doctor blurted out in his British cum Australian accent “wow that’s a huge tummy!” 🤦🏽‍♀️ At this point I was so done with this pregnancy that I didn’t care if the whole hospital saw my nakedness. We are just like dust! The excitement was real! I got scrubbed, spinal block and epidural shots given and I was set. My anesthesiologist was the funniest man ever. He made me laugh all the way through. By the way, that 3rd injection is painful. I literally cringed and the anesthesiologist’s assistant had to immediately hold me so I don’t move. The first two were ok though.

My husband was finally called in and sat by my side. With my daughter he refused to follow me because he was scared 😂😂😂. We are in this together mate! The doctor began to cut me open, don’t worry, I didn’t feel a thing lol. As soon as he brought the first one out, I heard ” baby A, 8:57″ then shortly after, I heard “baby B, 8:58.” So local. 🙄 I was like yessssss! Thank You Jesus! The relief I felt, stop ! As if a weight had been lifted off me. Well yes, literally. I immediately felt light.

The doctor called my husband to come over to see the babies and as he was passing, he mistakenly turned his head to look at the lower part of my body. The brother saw my my insides 😂😂😂. EVERYTHING ! Who sent him ? He’s too inquisitive. I am so glad that happened. He was shocked to say the least. Next time ! They had 2 nurses on stand by, one for each baby, so that they don’t get mixed up. My husband left with them to make sure of this. Officer Columbo. Trust me, we had heard too many stories to not be careful with ours.

Now this part gets someway. All that was left was for me to be stitched up and ready to go. But no, my village people wanted to follow me there. All of a sudden I started feeling pains in my tummy. It started very mild and kept increasing. It felt as if my insides were being rearranged. The pain got so bad that I started crying. I was immediately given a very high dose of paracetamol. It didn’t work. Ko le werk. The doctor then requested that they give me a local anesthetic to numb the pain and insert the morphine ASAP. Come and see me crying. I was legit scared, wondering what was going on with me. I didn’t experience this with my daughter so it was new to me. Here I was thinking my insides were being rearranged only to later on find out that the doctor was massaging my uterus for it to shrink. It was so huge!!!

I got to my room feeling so relieved and thanking God that I had made it ! C section isn’t for the faint hearted. And to think some women will tell you that you didn’t really give birth if you had a CS! If you tell me that, you’ll see what I’ll do to you! The boys were brought to me later in the afternoon at about 5pm and oh what a joy it was! Two big boys! PJ weighed 3.45kg (7.6 pounds) and MJ was 3.15kg (7 pounds). Mind you, this isn’t the normal weight for twins, they are usually smaller. My daughter weighed 3.6kg so for these boys to weigh this much, hmmm, it is only God. All that wakye and milo and bread and egg paid off. I wasn’t huge for nothing.

Finally the twins made their grand entrance on the 17th of December 2018 at 8:57 am and 8:58 am respectively. For what we have received, we are truly thankful.

View all posts by Nkansa